Less than a day’s drive from most of the Eastern US, Smoky Mountains National Park and the surrounding communities of Gatlinburg and Pigeon Forge are incredibly popular destinations for vacationers. For many of the park’s visitors, the natural wonders of the mountains and wildlife bring them back year after year. In late November 2016, an intentionally set wildfire blazed through 11,000 acres of the forest (17,000 acres total) from Chimney Tops to Gatlinburg. Once the fire was contained, many visitors wondered how badly the Chimney Tops fire damaged the park they loved.

Luckily, as vacationers, the majority of the damage caused by the fire is unlikely to affect much of your trip.  In fact, if you spend the majority of your vacation in town, enjoying all the activities Gatlinburg and Pigeon Forge have to offer, you may notice little difference at all.  Construction on the Gatlinburg Sky Lift is ongoing, as it is on many of the local and rental cabins. But Ripley’s Aquarium and other shops and restaurants on the main street are unharmed and open for business.

Fire damage is obvious in affected areas within the National Park.  Charred areas with blackened tree trunks have none of the undergrowth that covers the untouched areas of the park.  While you might expect damage to occur in wide areas, burned and unaffected areas actually create a patchwork.  Because fire spread in part by strong wind gusts up to 87 mph, embers blew up to 1/2 mile, leaving spaces between untouched.  Those same strong winds downed power lines, sparking fires in new locations closer to populated areas.

As you drive through the park on route 441, you’ll see some of those patchy burned areas next to the road.  Charred, blackened areas with no growth appear in the middle of green unaffected underbrush.  In other areas, tree trunks and rhododendron are lightly burned at the bottom but still alive with green tops.  The view of Chimney Tops from one of the many roadside pullover areas shows the swatches of damage on the mountains where the fire burned the hottest.  The Roaring Fork Motor Nature Trail outside of Gatlinburg weaves out of the fire zone and back in again. The difference is clear along the route. At the beginning, the green, waxy-leaved rhododendrons characteristic of the forest fill the forest floor. But by the end, brown withered tubes of those same formerly green leaves cover the ground and bushes.

The fire affected approximately 2% of the land, so the majority of the National Park is just as you remember. Popular areas like Cades Cove, Clingmans Dome, Mingus Mill, and the surrounding areas untouched by fire and ready for visitors.  Fish and wildlife populations are expected to be only minimally affected.  We saw all the usual animal inhabitants during our March trip, including a happy mama bear with her twin cubs.

For hikers, most of the well-traveled trails are open and stunning as ever.   Alum Cave Trail, Mt. LeConte, and Laurel Falls are all open, along with most others.  However, several of the hiking trails in the Chimney Tops fire zone will remain closed indefinitely including the Chimney Tops Trail.  For lists of currently closed trails, visit the Smoky Mountains National Park Closure and Alerts list. Be cautious when hiking open trails near fire damage, since winds can blow over damaged branches and trees.  Hikers may also encounter fallen logs or missing footbridges on trails in the area, and should stay on marked trails to avoid damaging delicate new plant growth.

Absolutely!  Think local. Eventually the forest will repair itself, and in a few years most areas will be indistinguishable from the rest.  But the surrounding neighborhoods aren’t so lucky.  Most of the fire outside the park happened on private land, with local residents taking the brunt of the damage.  Supporting locally-owned restaurants, artists, and stores helps put your tourism dollars back into the community and helps residents replace their lost homes and belongings.

This site uses Akismet to reduce spam. Learn how your comment data is processed.

I'm Carla, and I've loved the water since the first time I opened an ocean picture book. My family and I are exploring the world's coasts, along with all the places in-between. 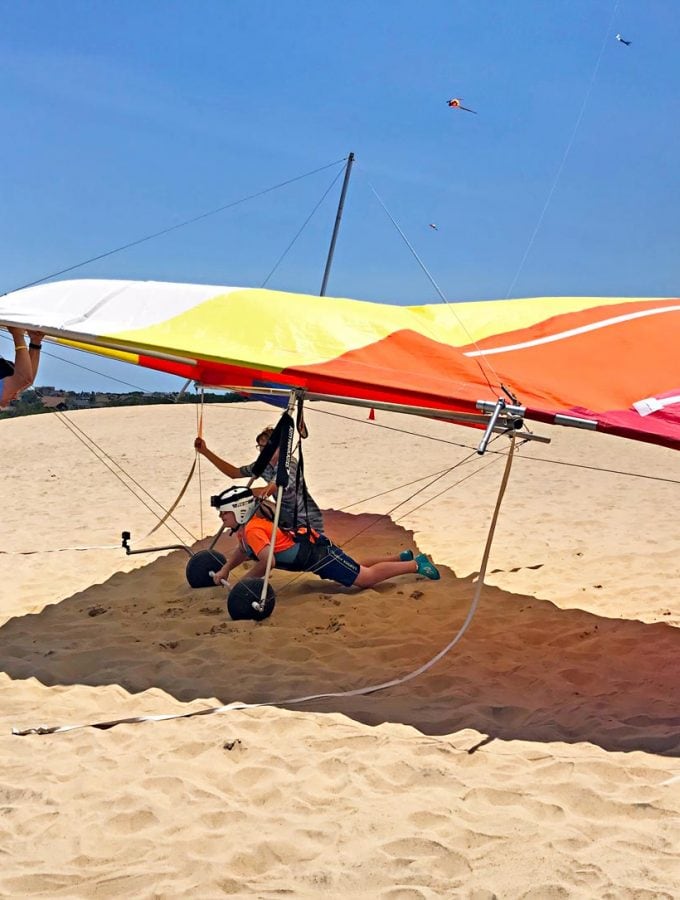 When you drive by Jockey’s Ridge State Park in Nags Head, you can’t miss the hang gliders perched on top of the landmark sand dunes. Like giant colorful birds, they coast down over the sandy slope to land gracefully at the bottom.  While some of us had more graceful landings than others, our Outer Banks…

END_OF_DOCUMENT_TOKEN_TO_BE_REPLACED

Get all the travel tips, destination guides, and inspiration right in your inbox. You won't miss a thing.
Spam sucks. You won't get any from us.
Share
Pin
Tweet